In March we reported on Suzanne’s work helping widows and their children to get off the streets. This began last Christmas when she and the boys at the Home invited street women and children for a meal. She continued meeting several of the women and was deeply touched by their life stories. Here is an update on what has been going on in the past 6 months:

(Names have been changed)

I have been praising God because of His grace to Eva. When I waved her goodbye at the Bus Station, I shouted, “Thank you Jesus !”

Her name is Eva, her daugther is Pam and the baby is Joseph. 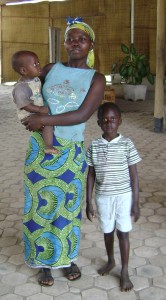 As I told you that on Christmas I had agreed with the children of the Home to celebrate Christmas in a new way by inviting many street children and street women to eat well with us. We rented a minibus which was circulated through different directions, picking them up and bringing them to the church. 128 street children and 22 street women with their children came to eat. We had also prepared, the day before, a small gift for each child to take with him or her, it was wonderful.

After their lunch, I took some time with those women, and we agreed to see them three days after. Since that day, I saw them many times, their stories were full of injustice, ignorance, lack of wisdom, feeling lonely, violence of many kinds… Some of them have been treated like animals by their husband or the civilian war…

My heart was feeling broken by their stories. I noticed that something should be done otherwise all those children were going to be street children, and they would be the worse ones because they were assisting with what their mothers are doing in order to live. That is why I gave them my time and forgot even to send email to all friends who have been blessing the Center by their financial support to the Home and to the construction in Matana. I ask you forgiveness for that.

Eva was living in the North of the Burundi, she had three children. Last year her daughter was forcibly taken to the city. Eva’s husband was unable to help and her parents-in-law gave Eva an order to get her daughter back.

She arrived at the city for the first time. She didn’t know anybody. She met some street women and joined them. After a few days, she heard about where the lost children are kept. She went to check and found her daughter in that place. That was God’s grace because it is unusual to get back a young girl like that without being sexually abused. That was God’s miracle. As she didn’t have a ticket to go back, and she didn’t have anything to eat, she became a street woman with her two children.

I started my test on Eva last week, I gave her $30 in BU Money to help her start a small business in the countryside like selling avocado. I brought her to the Bus Station where I gave the driver her address and asked him, in front of some witnesses, to be sure to take her there. One thing, all day and night, my heart was full of joy. It was like I got another key or strategy to save the children from the street. During my talk with those street women, I found among them five women who wish to go back to their families with wholeheart. One has two children, two others have five children each, another has one child and Eva who has two with her and another child in the countryside. I thought that it could be a good thing to help those five women to leave the street and save 16 children at one time.

I am also helping some street children, between 10 to 14 years old, I see them three times a week.

May God bless you, 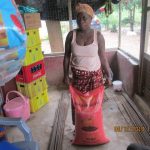 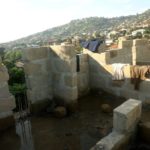 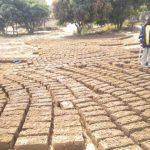 Graduation at the Kondie Farm School!